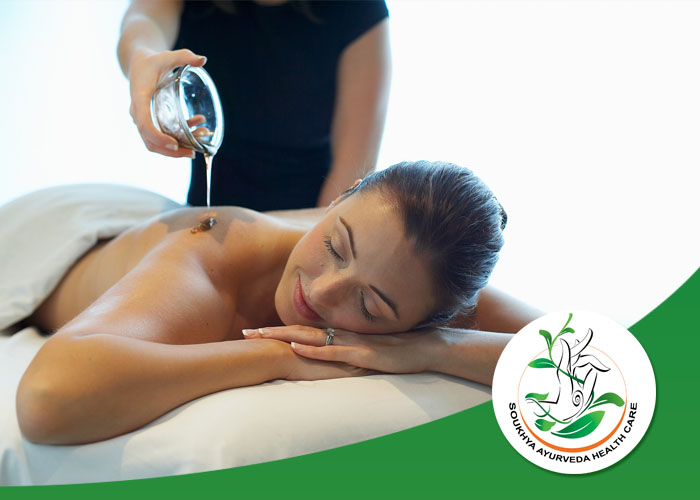 The ayurvedic oil massage is an integral part of the daily routine recommended by this healing system for overall health and well-being. Traditional ayurvedic texts wax eloquent on the benefits. Here's what one says "give yourself a full-body oil massage on a daily basis. It is nourishing; pacifies the doshas; relieves fatigue; provides stamina, pleasure and perfect sleep; enhances the complexion and the luster of the skin; promotes longevity; and nourishes all parts of the body."

Here are some of the benefits traditionally associated with regular performance of this pleasant daily ritual:

Abhyanga provides the means for transdermal absorption of the healing qualities of the material used in the massage, and it helps the skin, which is the largest organ in the body, perform its diverse functions efficiently, whether it is allowing toxins to be released from the body or nourishment to be absorbed by the tissues 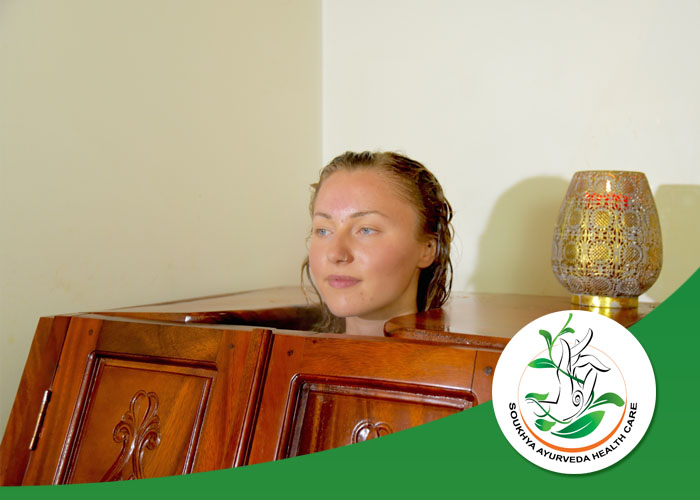 It is also called bashpa sweda a special treatment in which leaves of medicinal plants are simmered and the body is exposed to the resulting steam. Good for flushing out impurities from the body, reducing obesity as well as excess fat and in the treatment of skin diseases.

Improves blood circulation in the body 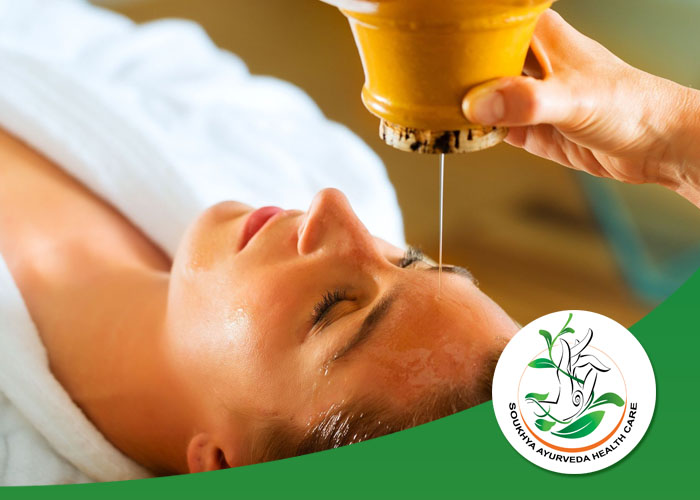 Shirodhara is a form of ayurveda therapy that involves gently pouring liquids over the forehead and can be one of the steps involved in panchakarma. The name comes from the sanskrit words shiro (head) and dhara (flow). The liquids used in shirodhara depend on what is being treated, but can include oil, milk, buttermilk, coconut water, or even plain water. Shirodhara has been used to treat a variety of conditions including eye diseases, sinusitis, allergic rhinitis, greying of hair, neurological disorders, memory loss, insomnia, hearing impairment, tinnitus, vertigo, and certain types of skin diseases like psoriasis. It is also used non-medicinally at spas for its relaxing properties. Studies report that ayurvedic shirodhara is a safe option to improve sleep quality among people who have sleep problems. Shirodhara is also effective in treating mental conditions such as anxiety, and mental stress. The calming effect produced by shirodhara is similar to that obtained with meditation. There are specialized forms of shirodhara called ksheeradhara, thakradhara, taildhara, and jaladhara. Shirodhara may begin with a full body massage known as abhyangam. Shirodhara also involves a head massage. Shirodhara is thought to work by relaxing the hypothalamus in the brain. It can also normalize the functions of hormones that regulate sleep and emotions 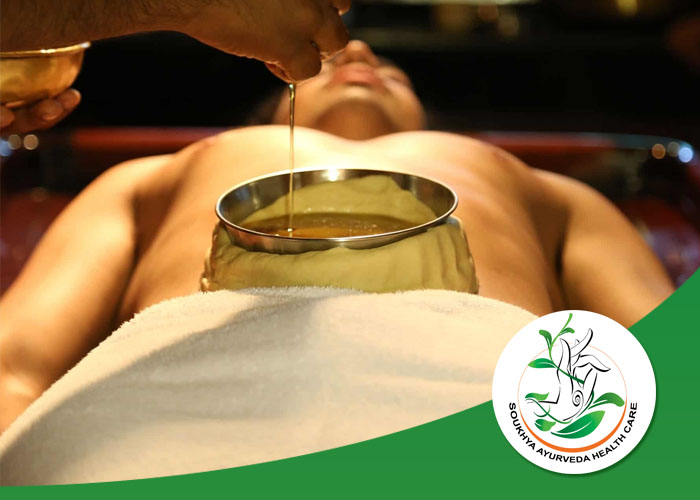 Considered as the mother of all treatments, basti cleanses the accumulated toxins from all the three doshas, vata, pitta and kapha, especially the vata toxins, through the colon. The importance of basti karma is that other than providing thorough detox, this procedure effectively balances the vata dosha. This is much needed because not only does the vata dosha cause majority of diseases in the human body, yet due to its mobile and erratic nature, the vata dosha moves the other two doshas viz. Kapha and pitta from one part of the body to another and thus aids in their disturbance and implementing symptoms in the form of an ailment. It is for this reason that vata dosha has to be balanced so as to cure the disease as well as stay clear of the same. Basti panchkarma therapy mainly aids to eradicate the disturbed or aggravated vata dosha and thus finds its importance.

Basti karma has been the prime part and parcel of ayurveda treatment ofpanchkarma since ages. It is believed that if properly performed, alone basti karmas can be rendering to the human body, would be nothing short of a miracle. 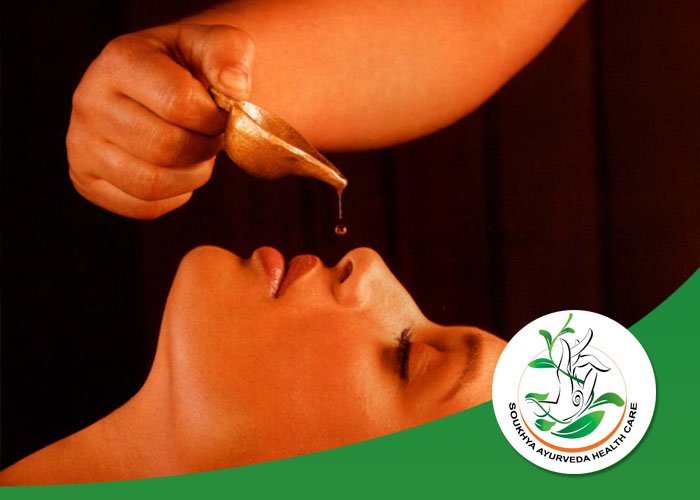 Nasya’ is an ayurvedic practice that encourages nasal administration of medicinal herbs, decoctions and oils. Commonly such treatments are known to clear sinus congestion, help clear accumulated toxins from head and neck region. However in ayurveda the purpose of nasya and many different application of nasya are used for therapeutic purposes. For therapeutic purposes medicated ghee, oils, herbal decoctions or herbal powders are administered. In ayurveda nasya is considered one of the most important holistic self-care that encourages internal detoxification. Many vaiya’s consider nasya as a part of ayurvedic daily routine and conducts in every day. 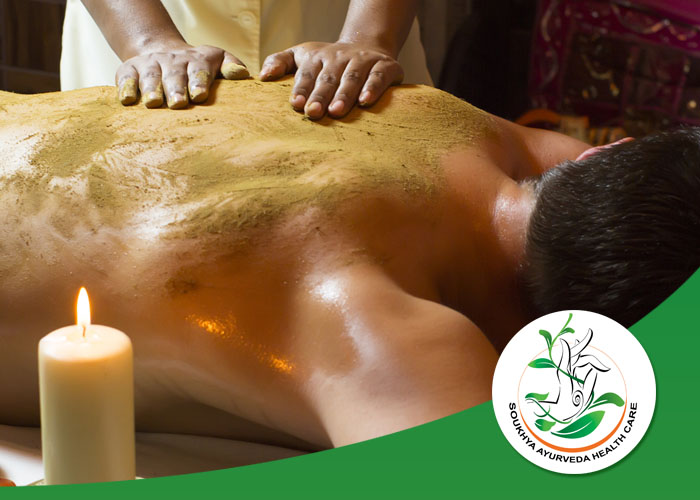 Soukhya Ayurveda Hospital and wellness center Provides an ayurveda therapy which is recommended and used for people suffering from inflammatory pain and conditions. In this specific treatment, a mixture is prepared by mixing the medicines and some herbal liquids together which made into a paste. This mixture is known as lepam. This paste is then applied on the several affected parts of the body. This lepam paste acts as a scrubber to the body which is used to rejuvenate blood circulation, make the skin smooth, remove skin disorders and relieve pain management, at the same time it also activates the healing and natural purifying abilities of the body. 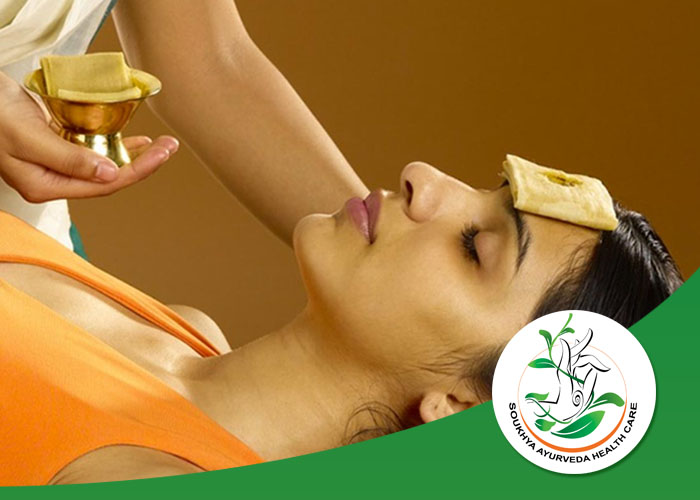 Pichu is used as an effective method to treat the ailments of head, spine and diseases of cranial nerves caused by vata disorder. In this treatment, medicated warm oil is applied on the head externally. It is done to a local area which is affected.pichu can be directed on a person as a main treatment for head and spine or a simplified treatment can be carried out with similar oil treatments in ayurveda. Pichu is a treatment done externally to a patient. In this treatment, a folded dry cotton cloth or wool with size just enough to cover the concerned area is taken. Thickness of this folded cloth is normally that of a palm. Now, at the center a hole is made on the folded cloth and slightly warm oil is poured through it periodically. The cloth or wool soaked in warm medicated oil is applied on the area under treatment. Throughout the treatment procedure, the oil is heated periodically and kept lukewarm. The cotton wool or the cloth soaked in the oil is left to stay on the affected area for a particular period of time all the way through the treatment. 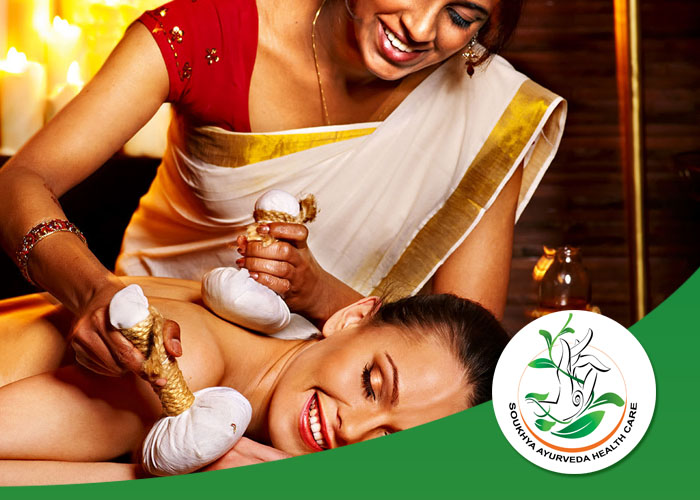 Njavarakizhi therapy involves a generous amount of medicated oil being applied to the whole body. The body is then massaged with small cotton cloth boluses filled with cooked njavara rice. The boluses are dipped in this regenerating mixture of cow’s milk and a brewed herbal decoction, and then applied all over the body to induce sudation (sweat). Njavara in malayalam stands for the rice that grows in 60 days ; kizhi stands for bolus. Njavara is an indigenous variety of rice grown in kerala, having medicinal properties.

Benefits: njavarakizhi treatment is highly rejuvenating, nourishing and prepares the individual to bear the stresses and strains of a busy lifestyle. It enhances physical consistency, strengthens the nervous system and improves the overall appearance of the skin. This is a strengthening treatment employed in neurological disorders, rheumatism, arthritis and malnutrition of limbs. 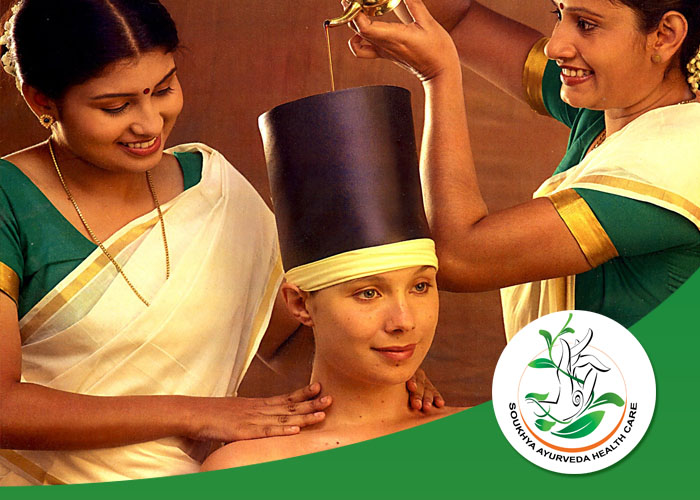 Head is an important organ of our body. The whole administrative setup is located within this head. All the activities of our living are governed from here. We need to keep our head strong and healthy for the entire system to be fit and healthy. In ayurveda, shirovasti means pooling the liquid medicines, especially herbal oils in a chamber or compartment constructed over the head. This also cures many diseases and prevents many psychosomatic diseases apart from providing unparalleled relaxation from stress and strain of life. This treatment is called shiro vasti or shiro basti. Which is a highly effective treatment from the leafs of ayurvedic wisdom which makes the person undergoing it strong and immune, physically and mentally such that he or she can tolerate the extremes of life including diseases, stress etc, can overcome their health related issues, remain ageless, fell-good, look-good and obtain the armor of prevention to many psycho-somatic illnesses. 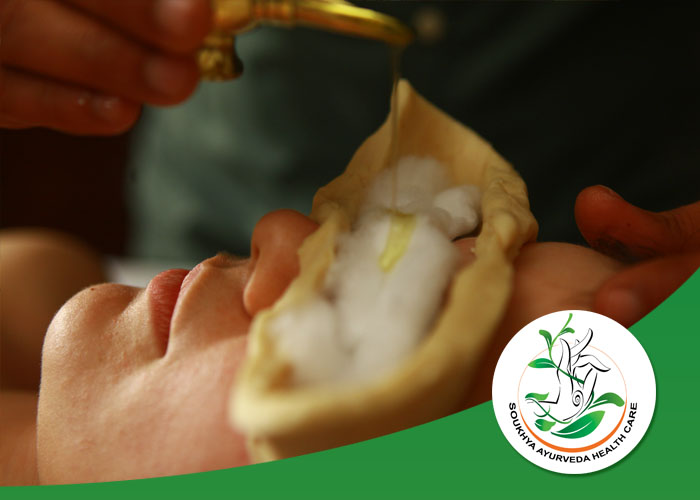 Head is said to be the uttamanga (best organ). It is an abode of all the indriyas (sense organs). Among all the indriyas (sense organs) nayana or eye, the sense organ of sight or vision is said to be the best and most important. Tarpana treatment is an efficient therapy of ayurvedic eye care. When the eye health is at its best, we enjoy the colourful manifestation of the world. But when the eye gets clouded by one or the other disease, we fell that we have topped the list of cursed. Stress and strain related disorders of the eye are common in the present era of computers and gadgets. We are now days witnessing school-going kids wearing spectacles at a tender age because of technology addiction and erratic study postures, wrong choices of food and sleep preferences. Computer eye syndrome or computer vision syndrome (cvs) is quiet common in most of the people. Ayurveda offers the best time tested remedies for eye disorders and eye strain. 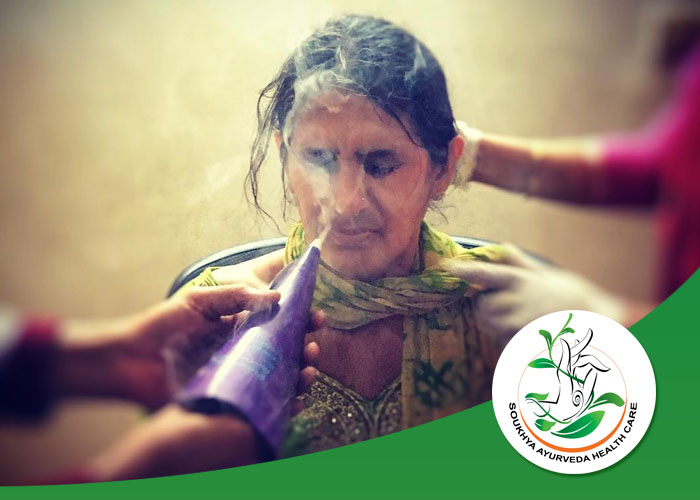 Smoking for the therapeutic purpose using a specially designed instrument or pipe is known by the name dhumapana. Using a special instrument the herbal powders are burnt and the smoke emitted is inhaled. The accumulation of the kaphadosha in the head, as well as respiratory system, is best cleared by this procedure. Following vamana karma and nasya karma therapeutic smoking is practiced as a follow-up procedure. 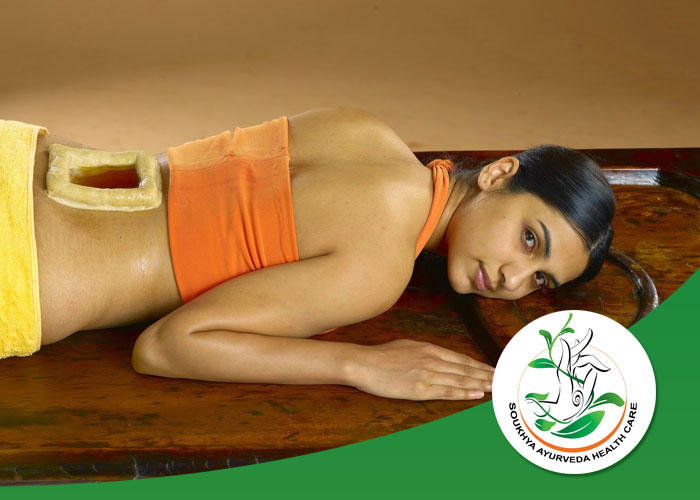 To achieve a balanced state of body, mind and consciousness, ayurveda prescribes purificatory therapy i.e panchakarma for the cleansing of body toxins. Kativasti, a part of pre-operative procedure prior to panchakarma is a very effective treatment for lower backache. The waist area of the body is called kati. Holding warm ayurvedic oils on the affected areas is called vasti. Kati vasti involves retention of warm thick medicated oil over the lower back or other parts of the spine for certain period.